Map of the Naples Underground 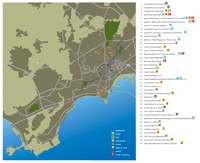 This map of the Naples Underground has been made primarily to get an overall picture about the most important underground spaces in the city. On this map are the – so far as is presently known – spaces mentioned that are accessible from the city ‘above’. After each name we have placed a symbol to indicate its purpose.
On the map are ‘acquedotti’ (water supply canals) marked with long blue lines. ‘Acqua’ means that the space has been constructed as a cistern or a water supply basin, ‘tufo’ marks a tuff stone quarry. With ‘archeologia’ is not meant that the spaces have been constructed underground, but are Greek or Roman structures that over time have become buried due to the heightening of the street level. ‘Tomba’ points out a cemetery, ‘luogo di culto’ is a place where gods or the dead were being worshipped. A ‘tunnel’ is indeed a – mostly by the Romans – constructed passage through a mountain or hill. And lastly a ‘rifugio antiaereo’ is an air-raid shelter. For such purpose they always used and modified existing spaces and made them more accessible. It is notable how in many indicated places more functions have been combined, as much in space as well in time.